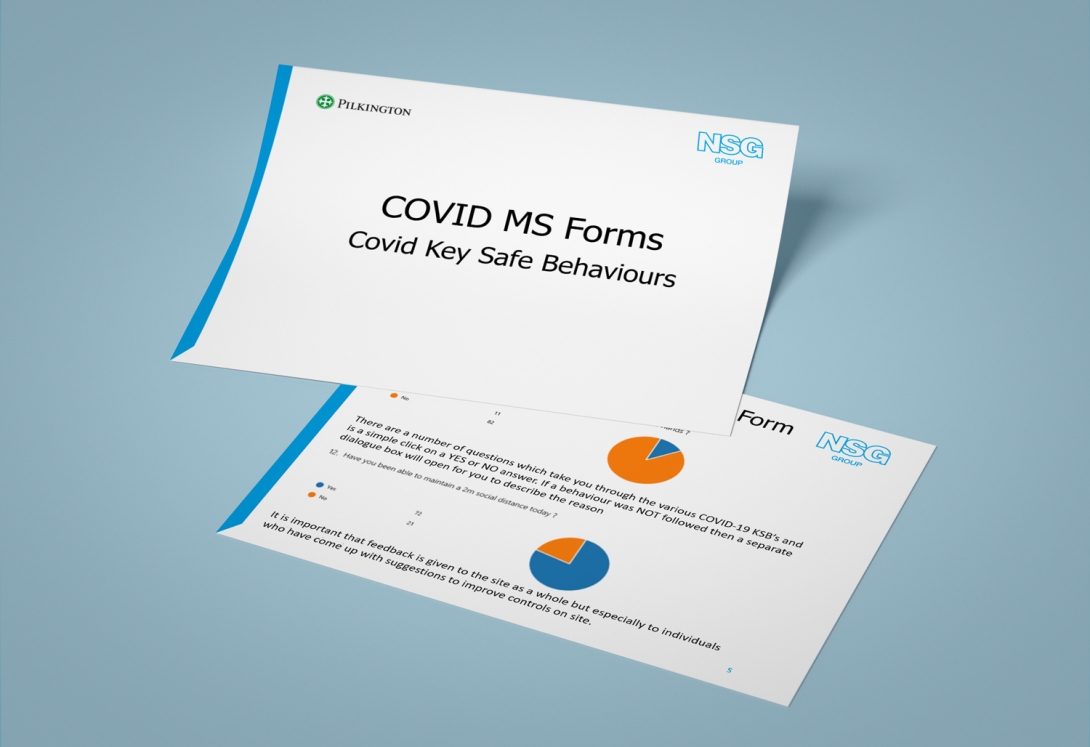 Over the last year, COVID-19 has resulted in the need to adapt the way everyone works, including increased hygiene and changing behaviours while in the workplace. British Glass member Pilkington UK, part of the NSG Group, thought there must be an easy way to ensure staff follow key safety behaviours which were of greater importance during the pandemic and decided to implement a new system using Microsoft Forms.

The previous behavioural observation process at Pilkington UK used pocket pads to record behaviours on site and collate them on an intranet database. These observations are key to recording safe or unsafe behaviours to ensure people’s safety on site, whether it be employees, contractors, or visitors. If unsafe, the person carrying out the observation will speak to the individual or individuals to explain the correct behaviour and gain their commitment to be safe going forward. Observations are required to be submitted at least weekly but often forms were lost or a large bundle arrived on the administrator’s desk at the end of the month giving them a great deal of work to update the database before the monthly statistics were generated.
Those who remained on site during lockdown decided to look at a quicker and simpler system to capture information. Microsoft Forms was the perfect solution to create a new system to quickly capture this data. The new observation form was streamlined to take less than two minutes to complete, with the key objective of reducing Desktop observations from being submitted.
As a result of key governmental advice on COVID-19 focusing on behaviour such as Wash your hands and Keep 2m apart, it was decided that the form should focus its behavioural observation content on COVID key safe behaviours. This was advantageous as it kept the observation process topical, but it also meant that failing measures would be highlighted by the observations and quickly remedied.

Observers are trained to speak to individuals at a safe distance who are seen as non-compliant and to anonymously capture their response, providing honest feedback on which COVID controls were failing, enabling the issue to be quickly addressed. The form also asks the individual for any improvements that could be made.  All this information is then reviewed and actioned daily.

One benefit of Microsoft Forms is that a link can be sent out to be used on a laptop or PC, or following its growing popularity, a QR code can also be generated which allows anyone with a smartphone to download a free QR Scanner App and use it on the code. This automatically brings up the form which can be completed in a matter of minutes. It is very simple to use; no training is needed, and the results are instantaneous. This new way of capturing the information is still proving to be very beneficial for ensuring COVID controls are working effectively at Pilkington UK.

“We implemented a behavioural observation process over a decade ago but in recent years it seems to have fallen down as the system was too long winded to submit observations and to obtain the results quickly so they could be actioned.

“The move to use Microsoft Forms to capture this data proved an instant hit. Using a smartphone or any computer to open the form which is structured to be quick and simple to complete giving us immediate feedback was a vast improvement. Employees who previously felt disillusioned with the old system were quickly back on board. Due to its success, Microsoft Forms is now being used in many other areas on site.”

“It’s great to see how quickly NSG have reacted to behavioural issues and have used this as a means of reducing the spread of COVID-19. By implementing a simple system, they have ensured they can help to control the virus within their workplace and remain operational as usual during the pandemic.”